I don’t think I was the only person who was incredibly impressed with the November FairyLoot box. It quickly became my favourite box that I’ve received so far, and I think it’s going to be pretty difficult for them to top it!

The theme was ‘Battles and Galaxies’ and featured items inspired by The Lunar Chronicles, Red Rising, and The Illuminae Files.

Here are all of the items that were inside the box!

The first item I saw in the box was this bath bomb which smells really good. I can’t find out what the actual scent is though, all it says is ‘Starburst scent.’ I’m looking forward to seeing what colour this turns the water!

If I went on holiday a lot and needed my passport, I would definitely use this all the time. It’s always so handy having something to protect something really important like a passport.

This is a perfect item to receive just before Christmas. Every year, I always try and get one new ornament to add to the tree, and this came just in time! It features a Shakespeare quote – ‘It is not in the stars to hold our destiny, but in ourselves.’

Usually we only get one coaster, so to get four was incredible! Each coaster features a quote from the books in The Lunar Chronicles, and I just realised after reading the spoiler card, that if you line them all up in the correct order, they create one big picture which is so cool!

These straws are my favourite thing that I’ve ever gotten in a subscription box. I hate using plastic straws and I don’t really like paper straws that much either, so to have these reusable ones is amazing!

I love iron-on patches, and although I haven’t read the Red Rising books yet, it’s still a really great design. That reminds me that I really need to read Red Rising soon!

The only thing that I was a little bit disappointed with was the plastic wrapper that the patch came in. I just wish that it had come without it, or in a paper bag instead, especially as the item before it (the straws) was environmentally friendly.

I’ve been wanting a new tote bag for the longest time and I wanted one that wasn’t black – all my dreams were answered when I saw this in the box! It’s beautiful and features a quote from The Illuminae Files. I will definitely be taking this bag with me everywhere I go. 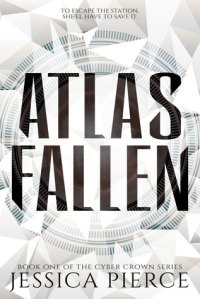 Tesla Petrov, daughter of an infamous traitor, no longer lives a life of promise in the Atlas space station’s elite flight training program. Stripped of her military rank and banished to the slums, she now scrapes out a brutal existence competing in illegal robot fights for Minko, ruthless leader of the Red Ashes crime syndicate. But when a wrong move costs her a fight—and a fortune—for the crime lord, Tesla knows her days aboard the Atlas are numbered.

Daxton Larose isn’t just visiting the station to celebrate the Centennial of the Crown—he’s hunting a terrorist threatening to end a century of peace on Earth. To do so, he’ll need someone who knows the station. Someone willing to strike a deal at any cost.

But as the hunt for the terrorist threatens to expose secrets from both their pasts—and as their dangerous attraction pulls them together—Tesla and Daxton must fight to protect what they love… or watch it burn.

Defeated, crushed, and driven almost to extinction, the remnants of the human race are trapped on a planet that is constantly attacked by mysterious alien starfighters. Spensa, a teenage girl living among them, longs to be a pilot. When she discovers the wreckage of an ancient ship, she realizes this dream might be possible—assuming she can repair the ship, navigate flight school, and (perhaps most importantly) persuade the strange machine to help her. Because this ship, uniquely, appears to have a soul.

Follow Stuck in Fiction on WordPress.com
Join 707 other subscribers