I desperately want to start getting my unboxing posts up faster than I have been recently – I’ve been so behind with all of them! Today’s unboxing is the August Book Box Club and I think I recieved it two or three weeks ago (see what I mean with being really behind?).

This box did arrive late; the team at Book Box Club kept all members updated every step of the way. To be honest, I didn’t mind that the box was late because these boxes always ship really early in the month, usually it’s around the second or third week. It never feels like there’s an extremely long wait between boxes every month which I love.

On to the unboxing…

I Am the Master of My Fate Canvas Bag by Catarina Book Designs ft. my cat’s paw 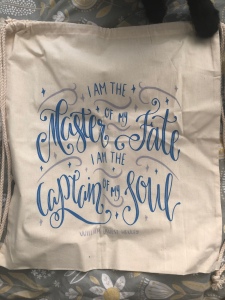 When I initially saw that this was a canvas bag, I was a little unsure of it. Personally, I’m a huge lover of tote bags, but the more that I see this one, the more that I love it. Firstly, the design is beautiful – how can you not love it?! But it’s also really nice to have a different kind of bag. It means that I can carry more inside because it’ll be across my back, instead of on one shoulder! I also have to give a little shoutout to Furye who is just as obsessed with this bag as me, he just wouldn’t let me get a picture without his paw being in it haha. 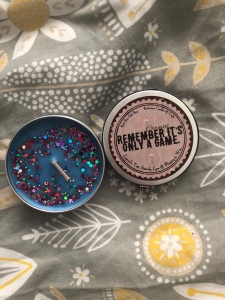 Caraval is one of my favourite series of all time so having an item inspired by those books was amazing. The description says that it smells like toffee apple, but I don’t think it does. I get a small hint of apple but no toffee. I can’t work out exactly what it smells like, but it’s not overly sweet. It reminds me of one of my all time favourite candles which makes me so happy.

How can I not love a Harry Potter inspired item, especially when I’m currently re-reading the books? I’m a little undecided where to put this patch at the moment, I don’t know whether to leave it on my bookshelf, or put it on a t-shirt or something. Or I could even put it on one of my pin flags… 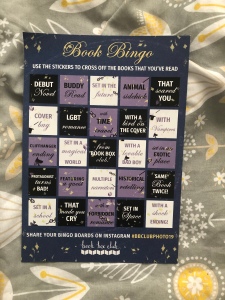 This is the item that caused the delay with shipping. I can’t remember exactly why, I think they either didn’t arrive in time, or they didn’t look right or something. But the bingo board can still be used without it which is great. I think this is such a great idea, especially if you’re struggling on what to read next. You can just look at the whole list of prompts and choose a book that fits the theme.

The Queen of Hearts is infamous for her love of games… unfortunately, I won’t be able to wear these. My piercings hate pretty much all earrings that aren’t gold which sucks for me because there’s so many beautiful designs that I can never wear. I’m sure that I’ll be able to find someone who will love these earrings though because they’re so cute (even if though it’s the Queen of Hearts haha). 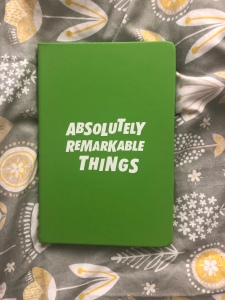 The Beckoning Shadow by Katharyn Blair 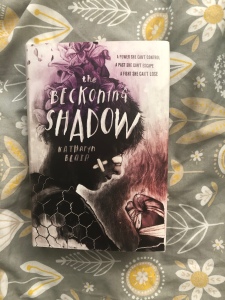 Vesper Montgomery can summon your worst fear and turn it into a reality—but she’s learned the hard way that it’s an addicting and dangerous power. One wrong move and you could hurt someone you love.

But when she earns a spot in the Tournament of the Unraveling, where competitors battle it out for a chance to rewrite the past, Vesper finally has a shot to reverse the mistakes that have changed her forever. She turns to Sam Hardy, a former MMA fighter who’s also carrying a tragedy he desperately wants to undo. However, helping heal Sam’s heart will mean breaking her own, and the competition forces her to master her powers—powers she has been terrified of since they destroyed her life.

I thought there was a good mixture of items this month with 6 items altogether, but 7 if you include the notebook from Hachette publishers. The items fit the theme really well, and even included a game itself which was really nice.

The book came with a signed bookplate which is always a special treat. For some reason, I thought this book had been out for ages. By ages, I mean years. I feel like it’s one that I’ve seen around before – but I don’t know why! Anyway… this sounds like a super interesting book, especially with the game element of it. The tournament is what’s drawing me in the most, so I can’t wait to read it and see what I think.

*I always try to base value for money on whether I would personally buy any of the items if I hadn’t got the box, and the durability of the items.*

My favourites from the box are the Harry Potter patch and the Caraval candle because I just know that these are two items that I’ll have for a long time. I don’t tend to burn candles that often, if I’m being honest, I tend to hoard them haha. Sometimes they smell too nice to burn!

Although the bag isn’t one that I would normally go for, now that I have it, I can see it becoming something that I can’t live without, especially when I travel up to Scotland. It’s nice to get something different in a book box every now and then.