It’s time for another unboxing that’s a month late haha! This time it’s the August Illumicrate – the theme for the month was ‘Armed and Dangerous’. When I saw the theme reveal I was pretty excited because it sounded like it was going to be a great box. Unfortunately, this wasn’t one that I loved as much as previous boxes but there were some great fandoms featured.

The Stone’s Throw Mug by Rosiethorns88

This is a beautifully designed mug inspired by A Darker Shade of Magic. However, it’s just not for me which I feel so bad for saying. I’ve got so many mugs and it’s impossible to keep them all! 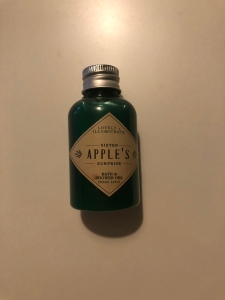 It’s nice to get something different in a book box every now and then! Shower gels are rarely in boxes but we all use them so it’d be great to see them more frequently. This one is apple scented and smells so good.

I love Scythe so much so I was very excited to see an item inspired by the book. As it’s a bottle opener, I’m not sure I’ll get much use out of it. I’m undecided on whether or not to keep it, but if I do, I’m sure that I can find the space to display it next to the books.

When I first saw this, I didn’t know what to make of it. Yellow is such an amazing colour but I’ve always been quite scared of wearing it because I feel like it’s too bright for me (I like my darker clothes!). But the more I look at this bag, the more it grows on me.

Inside this little container was a metal spoon, fork, and straw. This is a great reusable item and I’m so glad that it was included!

Every month, Illumicrate feature a new collectible coin inspired by different fandoms and characters. At first I wasn’t really sure what to make of them, and as the months have gone by, I’ve not done anything with them. I always feel so guilty when I don’t like an item because I know how much time and effort went into designing and making them!

Gideon the Ninth by Tamsyn Muir 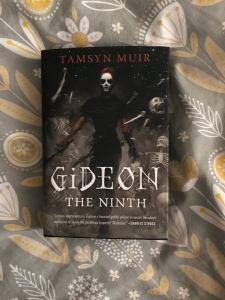 Brought up by unfriendly, ossifying nuns, ancient retainers, and countless skeletons, Gideon is ready to abandon a life of servitude and an afterlife as a reanimated corpse. She packs up her sword, her shoes, and her dirty magazines, and prepares to launch her daring escape. But her childhood nemesis won’t set her free without a service.

Harrowhark Nonagesimus, Reverend Daughter of the Ninth House and bone witch extraordinaire, has been summoned into action. The Emperor has invited the heirs to each of his loyal Houses to a deadly trial of wits and skill. If Harrowhark succeeds she will become an immortal, all-powerful servant of the Resurrection, but no necromancer can ascend without their cavalier. Without Gideon’s sword, Harrow will fail, and the Ninth House will die.

Of course, some things are better left dead.

It’s difficult to rate this one as a lot of these items won’t be ones that I’ll use or keep. However, despite that, there was a great variety this month. A lot of the items included are ones that aren’t featured frequently such as the bottle opener and shower gel. It was also lovely to see different fandoms featured; it’s so rare to get a Scythe item despite the books being insanely popular!

I’ve heard a lot about this book over the last few weeks. It’s almost been impossible to avoid it! I’m super excited to read it and can’t wait to see if it lives up to the hype. This is another exclusive edition, with sprayed black edges, signed by the author, a design underneath the dust-jacket, and trading cards based on the book.

Again, even though this box wasn’t the best one for me, it’s still worth the money in my opinion. I think there’s definitely at least one item in the box that everyone would enjoy, and the special edition book makes it even more incredible.